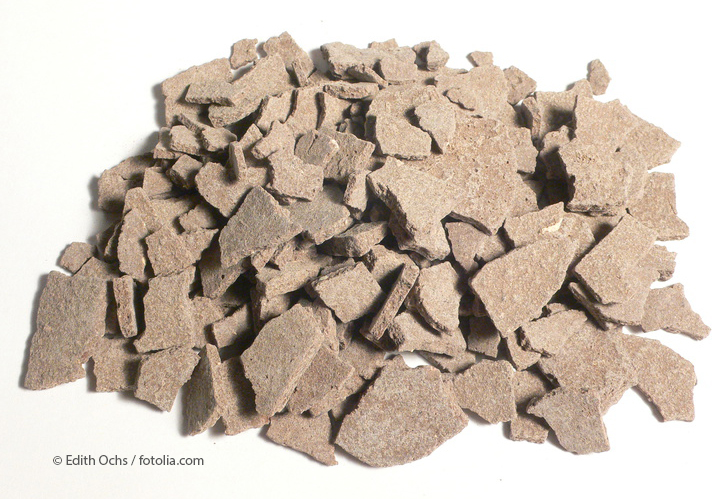 Nanoclays (clay minerals) can be extracted from natural sources and used thereafter. The layered structure enables the material to either swell or shrink depending on its uptake capacity for water. In addition nanoclays are not flammable and the plastics industry uses this feature to improve fire safety of their products. Integrating nanoclays into the plastic reduces drastically the amount of combustible material and if the plastic material is on fire a protective is layer is formed preventing the spreading of the fire.

Further applications include nanoclays as additives in food contact materials which reduce the oxygen transport across the film and consequently enhance the lifetime of foodstuffs.

How can I come into contact with this material?

Since nanoclays are mainly used as auxiliaries and firmly embedded in synthetic materials such as flame retardants there is no danger to get into direct contact with nanoclays.

Is there any risk from this material to humans and the environment?

Inhalation of nanoclay particles has been shown to cause only minimal and transient inflammation of lung tissue.

So far there are no data available on the behaviour of nanoclays in the environment. Since nanoclays are generated from naturally occurring sources it is difficult to distinguish between the natural and synthetic form of this material.

Nanoclays are considered to be harmless and are mainly used in flame retardant products.

Nanoclays are a good example of naturally occurring nanomaterials. 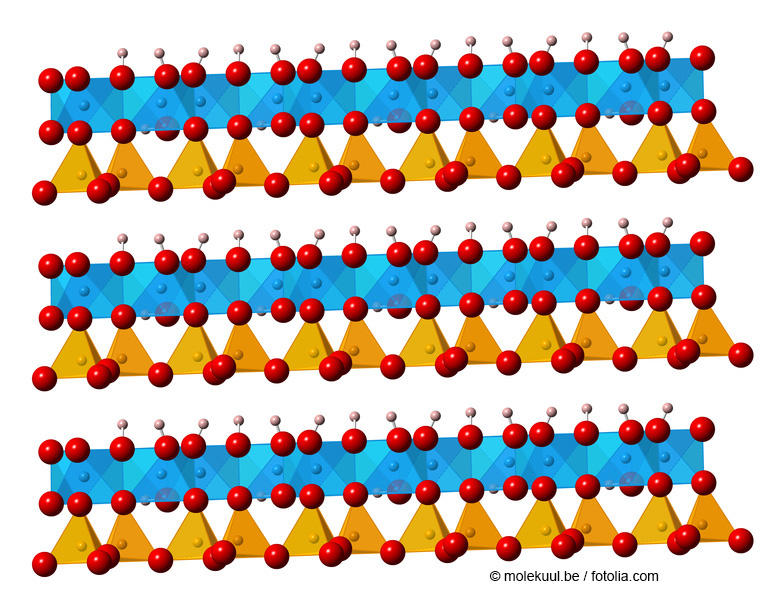 Nanoclays originate from naturally occurring clays, which are mainly made up of finely divided mineral particles. The clay particles consist of layered silicates, which are compounds based on the elements silicon, oxygen and other elements. They can be thought of as a "stack" of two-dimensional single, double or multi layers, which are formed by corner-linked silicate (SiO4) tetrahedrons. Due to the lack of chemical bond between the layers, the stacks are able to either absorb or dissipate water and other substances between the different layers causing swelling or shrinking of the clays. This is a major difference between (nano)clays and the more rigid framework silicates or tectosilicates (see also zeolites).

Montmorillonite is the main component of bentonite and the technically most significant clay mineral. It is composed of double layers of silicate tetrahedra with embedded octahedron layers of aluminium, hydroxide and iron ions. A typical montmorillonite particle consists of approximately 1 nm thick aluminium silicate layers with lateral dimensions in the range of several hundred nanometres to about 10 micrometres, which are combined into large stacks.

Nanoclays are non-combustible materials, which therefore are used in flame and fire protection for plastics. Mixing them into the plastic reduces the overall amount of combustible material. If the plastic burns, a separating layer forms, which hinders burning progress. Nanoclays are indispensable nowadays for the electrical and electronics industry.

Due to their ability to bind caesium, nanoclays are used to reduce radioactive contamination.
For use as cat litter, a mixture of mostly zeolites, sepiolites or bentonites or montmorillonites is used. They show a high absorption capacity for water and odour-causing components from the cat urine and faeces.

Food packaging films and plastic surfaces are other application areas for nanoclays as plastic additives (not approved in the EU). The addition of nanoclays to the plastics leads to higher tensile strength, improved barrier and abrasion properties, excellent surface qualities, low thermal expansion and very good flow and processing properties.
This outstanding property profile qualifies plastic-nanoclay-composites as an interesting alternative to conventionally reinforced materials. In addition, chemically incompatible plastics can be mixed with the help of nanoclays, resulting in a plastic that optimally combines the properties of both plastics.

Powder from nanoscale nanoclays is not self-igniting. Nanoclays mixed with air (dust) are also non-flammable under the influence of an ignition source, so there is no possibility of dust explosion. 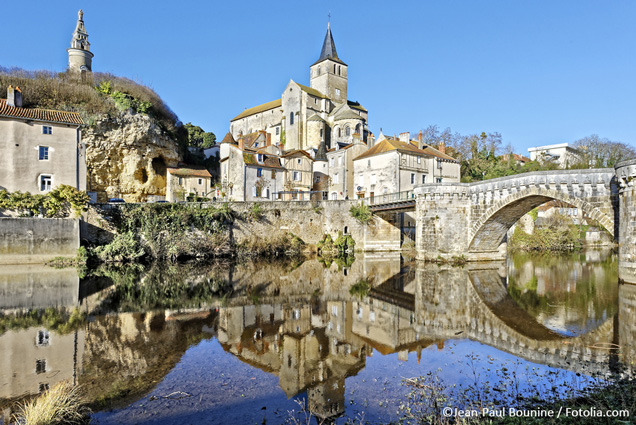 Naturally occurring sedimentary rock bentonite, which consists of 60 to 80 percent of montmorillonite, is the major source for industrial nanoclay production. The name "bentonite" originates from a clay deposit near Fort Benton in the US state Wyoming and describes an extra-fine clay mineral produced by the weathering of volcanic ash. Important European deposits for bentonite are found on the Greek island of Milos, in Turkey and in Germany. One of the largest German mining areas for the mineral is located in Bavaria. Montmorillonite is named after a deposit at Montmorillon in southern France. Montmorillonite clays are formed by the weathering and transformation of volcanic ash, tuff and alkaline rocks (e.g. basalt).

Many applications and products from the cosmetics and agricultural industry or even cat litter producers preferably use natural forms of bentonites.
The swelling capacity in water makes natural bentonites ideal materials for applications in foundry, construction and drilling industries as well as in the food sector. Most often, alkaline activation is carried out to further improve the desired properties. In this process, the cations (magnesium, aluminium, calcium) of the intermediate layers of montmorillonite are replaced by sodium ions. Industrial production steps include first the kneading activation of bentonite with soda (NaCO3) followed by a drying process and subsequent grinding of the sodium montmorillonite.

Bentonites are used in their acid-activated form in paper production and as catalysts. These bentonite forms are used whenever a large surface area is required for their adsorption properties. The reaction with acids facilitates the removal of cations (magnesium, aluminium, iron) from the intermediate layers, which are then replaced with hydrogen cations. Depending on the degree of acid activation, specific surface areas of up to 450 m2/g can be achieved, which is very important for the use as catalyst.

Organophilic modified bentonites are used to adjust the flow properties of oils, fats, ointments and plastics. Due to the organophilic modification, the surface of the bentonite is converted from originally water attracting to water-repellent, which allows for a complete distribution/dispersion of the individual layered silicate platelets in organic (water-repellent) solvents. This is important if you want to use water-repellent nanoclays for adjusting the flow properties of solvent-based paints and varnishes or integrate them into in plastics.

Naturally occurring halloysite nanoclays could be used e.g. as carrier for controlled drug delivery or as a means for adjusting flow characteristics. The mineral consists of double-walled tubes of aluminium silicates with dimensions of 15 × 1000 nm and is chemically similar to kaolin.

The global market for nanoclays is growing and is estimated to amount to more than 3.3 billion US dollars in 2023.

In Asia and the USA, nanoclays are allowed in food packaging. Particles from packaging can pass into food in small quantities. Nanoclays cause cell damage in very high concentrations. 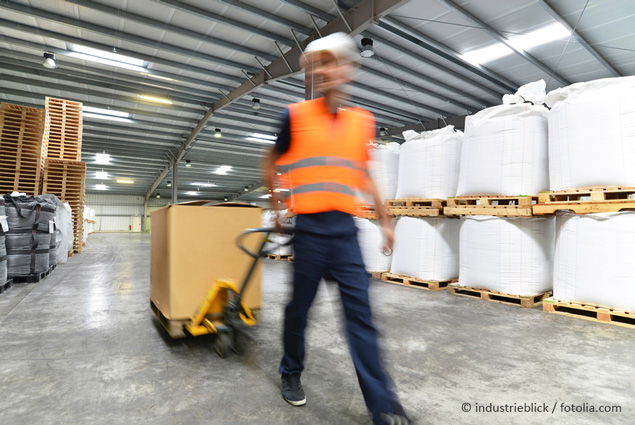 Worker in the warehouse ©industrieblick/fotolia.com

In one of the largest Sepiolite production plants in the world, very high concentrations of this nanoclay dust were recorded in the bagging department [1]. A study of the 218 workers has shown that extensive exposure results in a lowering of lung function. Nanoclays are able to migrate from food packaging (approved in Asia and the US, banned in the EU) into food. The amounts are very low [2].

Studies on Living Organisms – in vivo

The instillation of sepiolite nanoclays in the lungs of rats led to a temporary inflammation of the lungs only. No adverse effects on other organs were observed [1]. However, these nanoparticles caused the formation of multi-core giant cells (so-called giant cells). The biological significance of this observation, however, is still unclear.

Studies Outside the Body – in vitro

A valid study showed that cells are damaged when the particle concentration is very high. In the same study, it was also shown that no damage to the DNA was observed (no genotoxicity) and no reactive oxygen species occur (no ROS) [1].
Literature

There is no data available on the environmental exposure to nanoclays.

There are studies demonstrating that components of nanoclays contained in food packaging may solve and subsequently accumulate in the packaged food [1,2]. Due to the resulting waste, release of nanoclays into the environment is also possible.

Only a few data are currently available on absorption into the human body. Inhalation of nanoclays causes only minimal and temporary lung damage.

Uptake via the Lung – Inhalation

The instillation of sepiolite nanoclays in the lungs of rats led to a temporary inflammation of the lungs only. No adverse effects on other organs were observed [1]. However, these nanoparticles caused the formation of multi-core giant cells (so-called giant cells). The biological significance of this observation, however, is still unclear. A study with workers of a plant for the production of sepiolite nanoclays has shown that the pulmonary function of workers who were exposed to a higher dust concentration was significantly worse [2].

Uptake via the Gastro-Intestinal Tract

Aflatoxins are naturally occurring mycotoxins e.g.in maize as feed. Studies on broiler showed that the addition of nanoclays to feed contaminated with aflatoxins reduces the toxicity of aflatoxins by binding nanoclays to aflatoxins [eg. 1].

There are few data on the risk nanoclays pose for animals and the environment. Nanoclays may be toxic for unicellular organisms. Nanoclays can have a growth inhibitory effect against bacteria (E.coli) [1]. In amoebae a reduced survival rate was caused by nanoclays [2].

There are currently no valid studies on the behaviour of nanoclays once inside the human body.

There is no data available so far on the environmental behaviour of nanoclays.